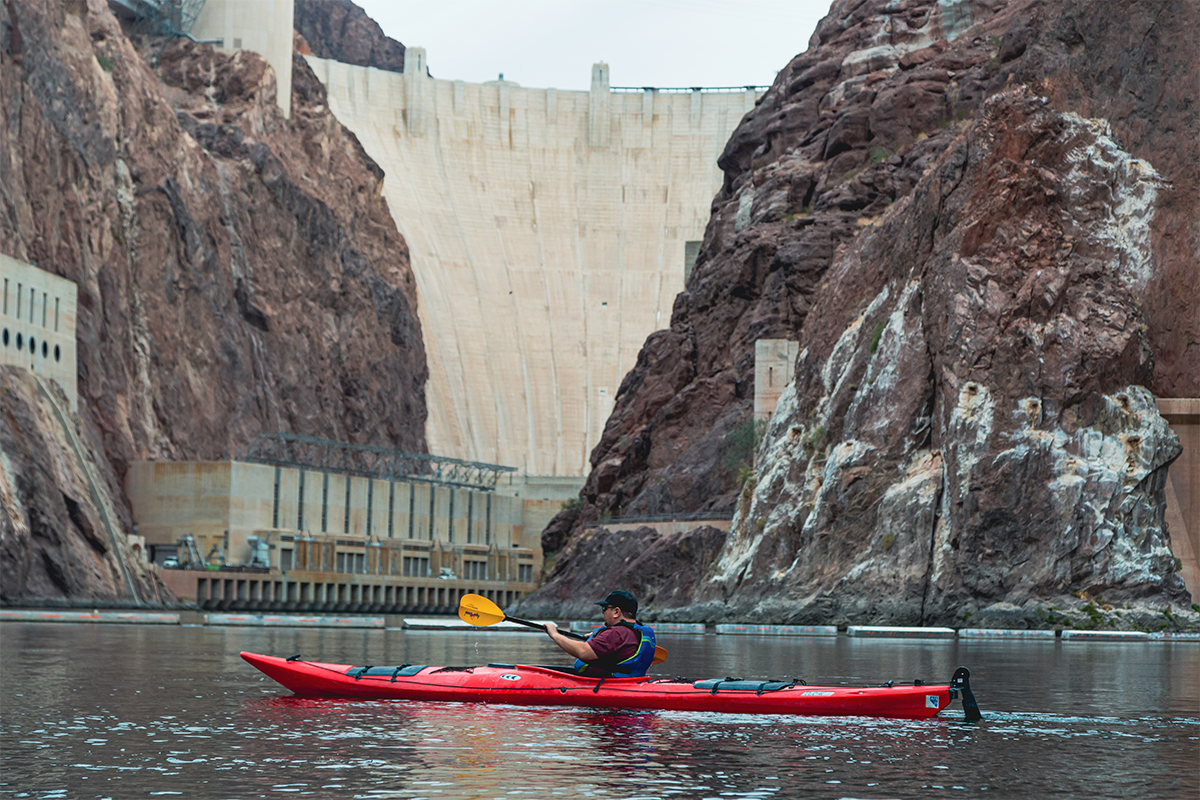 Hoover Dam is one of the most-visited tourist attractions in the U.S., welcoming around seven million tourists annually. It's just a 45-minute drive from the Las Vegas Strip and 30 miles southeast of Las Vegas, so families, groups of friends, and solo travelers who want a short day trip can easily schedule a tour.

Do you want a change of scenery while on vacation in glamorous Sin City? Visit Hoover Dam for an informative tour and learn more about its history. After that nature escape, you can quickly return downtown for more table games, concerts, and shopping.

Where is the Hoover Dam?

Hoover Dam is a massive curved gravity dam situated within the Black Canyon and Colorado River at the Nevada-Arizona border. It measures 726 feet tall, 1,244 feet long, and 45 feet thick at the top. From the base, it's 660 feet wide.

About 4.3 million cubic yards of cement were used to build the entire structure. It's the tallest dam in the country, just second to Oroville Dam, which stands 770 feet.

Hoover Dam is among the world's most popular dams, admired by people from all over because of its rich history, advanced mechanical design, and the stunning landscapes around it. Lake Mead, the biggest reservoir in the country formed due to the construction of the Hoover Dam, is just 20 minutes from the site.

This part of Las Vegas offers many opportunities to relax, unwind, and learn! Here's a brief background on Hoover Dam that will get you even more excited for your trip.

The dam was constructed from 1930 to 1936, during the Great Depression, to control flooding and divert the flow of the Colorado River for agricultural irrigation. It was also built to supply water and hydroelectric power to households in nearby areas.

The U.S. Bureau of Reclamation was asked to take on the project based on the vision of one of their engineers, Arthur Powell Davis. Back then, the initiative was called the Boulder Canyon Project, an ambitious plan that took nearly three decades of research, design, and negotiations.

When the project was formally proclaimed in 1930, then-Secretary of the Interior Ray Lyman Wilbur ordered the dam to be named after the then-U.S. president Herbert Hoover. However, that didn't happen as tradition calls for it to be named after the law that authorized it: the Boulder Canyon Project Act. Thus, it was referred to as Boulder Dam or Boulder Canyon for the next several years.

Building the dam proved to be a huge challenge. It involved a slow, grueling process that required seven states through which the Colorado River runs to work together and share water allocation. The agreement of those states led to the 1922 Colorado River Compact, but it wasn’t until the Boulder Canyon Project Act of 1928 that the construction of the dam was finally authorized.

In March of 1931, the construction contract was awarded to Six Companies Inc., a group of firms that raised the required $5 million performance bond. It was a steep amount no single company could afford at that time, during an economic depression.

The budget approved by Congress for the Boulder Canyon Project was $165 million. Back then, it was the most expensive construction ever approved by the federal government.

Countless challenges needed to be addressed even after the project got a green light. People in charge needed to secure financing for operational and maintenance costs. Moreover, they had to build living quarters for workers. Establishing roadways and railroads to transport materials and specialized equipment was another critical aspect since work was to take place in a remote area with dangerous terrain.

Upon hearing about the dam project, several workers and their families camped in Boulder City, hoping for employment opportunities. And many weren’t disappointed. A community was built in Boulder City, six miles from the work site, in the early 1930s to house employees.

Overall, 21,000 workers contributed to the construction. Unfortunately, many of them, including the 5,000 laborers employed during the peak of construction in 1934, went through horrible work conditions to meet strict timeframes.

At one point, they were asked to operate specialized equipment under the sun's heat. They cleared canyon sidewalls while hanging 800 feet above the ground, carrying 44-pound jackhammers. Throughout the construction, they were constantly exposed to carbon monoxide poisoning, electrocution, and dehydration. These dangerous tasks led to several accidents and 96 fatalities.

A monument on the Nevada side now stands to honor those who perished during the construction. The marker reads, "They died to make the desert bloom." Indeed, the workers' courage and sacrifices paid off.

The final concrete block was poured by May 1935. Less than a year later, in March 1936, all of Hoover Dam's features were completed. Then-President Franklin D. Roosevelt dedicated it on September 30, 1935.

More than a decade later, on April 30, 1947, the name “Hoover Dam” was restored, through a resolution that the 80th congress passed. Today, tourists visit its facilities for interactive displays, educational exhibits, and to do outdoor activities in the nearby areas.

What’s amazing is that beyond being a modern engineering marvel and historical landmark, the Hoover Dam also offers various ways of experiencing nature. You can explore the area by paddle, foot, or air. Appreciate the great structure and the surrounding deep canyon walls, hot springs, caves, and hiking trails from various perspectives!

Kayaking is, of course, still the best way to move around Hoover Dam. Make Evolution Expeditions’ kayak tour a part of your bucket list! Be prepared for hours of paddling, with stops along the way to take amazing photos of the dramatic natural landscapes you can never reach by hiking or while aboard a chopper.