5 Reasons You Should Kayak Emerald Cove 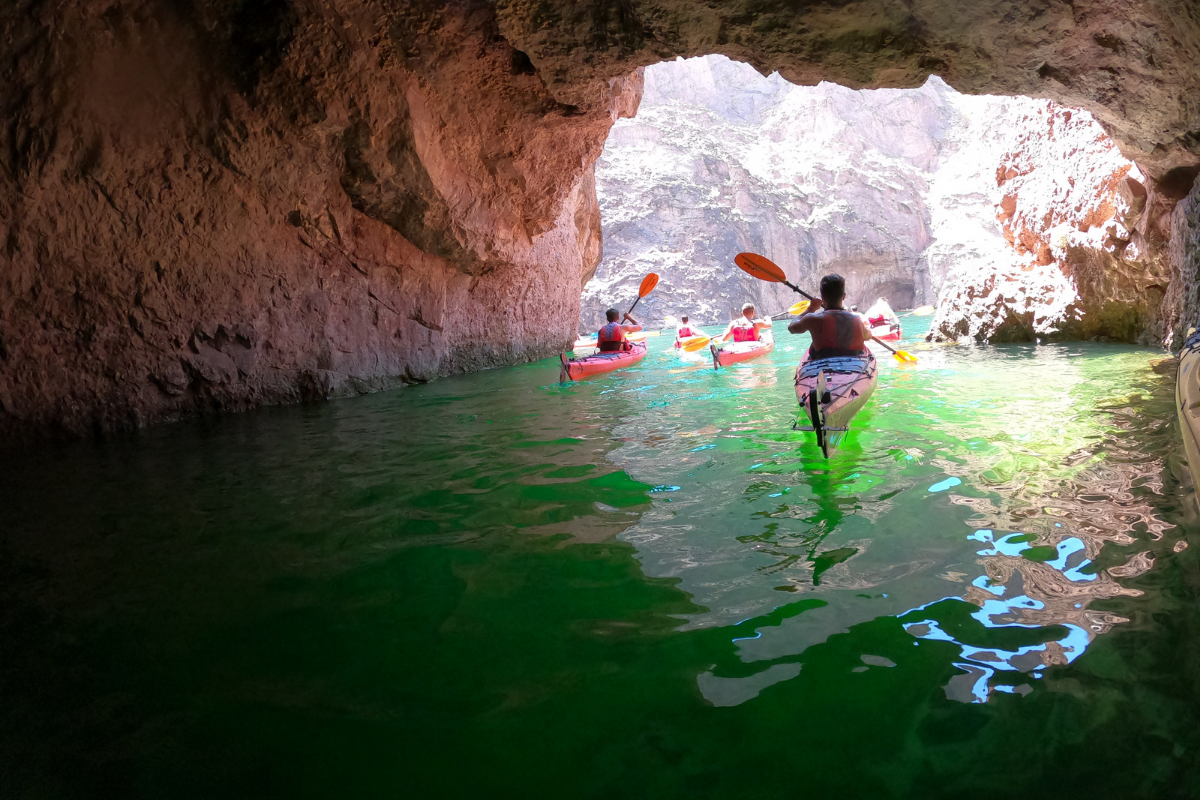 In The Wizard of Oz, Dorothy goes to Emerald City to see if the wizard can help her get home to Kansas. Las Vegas has its own version of the Emerald City, except it’s something we actively escape to. Emerald Cove in Las Vegas is a far cry from the neon lights, nonstop influx of tourists, and bustling nightlife. If you want to experience it to its fullest, then fasten on your lifejacket and keep reading for five reasons you should kayak Emerald Cove. It is, hands down, one of the best places to kayak in Las Vegas.

Note: Emerald Cove also goes by the name Emerald Cave. They are used interchangeably and refer to the same place.

5 Reasons Why You Should Kayak Emerald Cove in Las Vegas

Take a break from the arid climate and chaos of the Strip. Emerald Cove has so much to offer. Here are just five things you’re going to love about it.

1. A Natural Phenomena You Won’t Find Elsewhere in Sin City

It’s called the Emerald Cove for a reason: the vibrant green hue that echoes off the rocky walls.

But what makes Emerald Cove green? Beneath the surface of the Colorado River is a healthy layer of algae. When the sun pierces through the 900-foot canyon walls and reflects off of the crystal clear waters, a natural green radiance reflects around you.

If you go on a guided kayaking tour of the Emerald Cove, your leader should know exactly where to take you to get the best experience and when you’ll get the best show.

Psst! Want to learn more about what makes this locale so special? We’ve got another blog on it! Learn more about Emerald Cove, a true Las Vegas treasure.

‍‍2. The Towering Walls of the Black Canyon

Emerald Cove is a cave set within Black Canyon along the gorgeous Colorado River. The waters here are calm, making it perfect for beginner kayakers and seasoned pros alike. It’s a mere 45 minutes from the Las Vegas you’re used to, but you’re in for a totally different environment.

Black Canyon is an experience in and of itself. It stretches a massive 17,220 acres and encompasses totally unique landscapes from the west to the east sides. In the west, you’ll find soft, rolling hills that are the result of the flow and erosion of basalt. Toward the east, you’ll see steeper volcanic cliffs sliced up by deep canyons. The elevations range from 600 to 3,000 feet, and Black Canyon is home to creatures like bighorn sheep and desert tortoises.

Emerald Cove kayaking with Evolution Expeditions starts at the Willow Beach Marina. Willow Beach, located in Black Canyon and with 235 miles of shoreline, is surrounded by steep canyon walls and promises to start your kayaking adventure off with a bang.

Willow Beach has quite an interesting history. Artifacts found along the Colorado River tell us that the location might’ve served as a prehistoric trading center. Around 250 B.C., the Basketmaker Indians from Lost City would camp there. Later on, Willow Beach became more well-known for its fishing opportunities. And once Davis Dam was built (thus creating Lake Mohave), the area started being expanded with additional amenities.

You might be debating exactly how to hit the water, but a kayak is going to give you the best experience with Emerald Cove. The cove itself is smaller in size. Other modes of transportation — like motorboats — don’t typically fit.

Kayaking Emerald Cove is perfect because a kayak is smaller and more nimble, and you’re going to have an easier time navigating the cafe. Plus, it’s going to make it easier to explore the rest of the Colorado River on your own terms.

5. So Much More Than a Cave

Your Emerald Cove kayak tour is going to be even more than paddling along the water. Along the way, you’re going to come across secluded and hidden beaches, other caves, hot springs that you can relax and rejuvenate in, and a sense of peace and serenity that you won’t find elsewhere. Aside from the bighorn sheep and tortoises, you might run into coyotes, rabbits, bald eagles, great blue herons, burros, and even wild horses.

Plus, the construction of the Hoover Dam left behind historic structures along the water trail, so you get a little slice of history, too.

Kayaking the Emerald Cove in Las Vegas isn’t just a watersport. It’s an experience. From start to finish, you witness previously unknown beauty, capture pictures of a lifetime, and build memories that’ll last forever. Las Vegas isn’t only about casinos, gambling, and nightlife. Not far from the glowing Strip is a gorgeous world just waiting to be discovered.

We would love to take you on this adventure! Ready to hit the water? Learn more about booking a guided kayak tour with Evolution Expeditions today.

How to Experience Nature in Las Vegas

What is Tandem Kayaking?